Years and years ago, radio stations made a wrong turn. They decided that their format would be their brand. In the 80s, I worked in advertising sales for a station dubbed “The Best Country in the City.” In the 90s I worked for an “All Hit” radio station. The music determined the brand, and that was wrong. 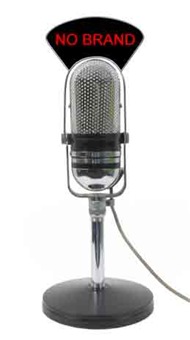 I’m a firm believer that traditional media, like radio, are not dead. But they are trying to commit suicide. Stations relegate themselves to commodity status with brands that mean nothing:

How about “No imagination“? Branding yourself after a music genre? That would be like a car dealer branding itself by the make of car it sells. It’s just as effective.

Radio stations stand for nothing. Their message is “just listen to our music and our personalities will try to shock you and make you laugh.” What you get from one radio station, you can get from another radio station. And that’s not by accident.

Most of the DJ’s on your local radio station are not broadcasting live. In fact, most of them are not even located in your city. They are what is called in the industry: voice-tracked. A DJ in a far-off city will record his/her lines and then program them in between songs and commercial breaks. Then the pre-fabbed show is sent digitally to the sister station. The DJ in your city is probably doing voice-tracked shows in several cities across the country.

But hey, basing a brand on a music format is convenient. If your audience numbers are down, you can blame the format. “People just don’t like jazz in this town. Let’s try lite rock.” But it’s not the music that’s the problem it’s the brand. There is no brand! And consequently there is no meaning or value to the station beyond the music it plays. And, you no longer need a radio station for music. Anyone riding in a car can download any song they want to a mobile device.

No meaning, means no revenue. Believe it or not, radio station audiences are growing. However, audiences spend less time with radio because of the ubiquitous mp3 player. To listeners it’s all music. They can choose to listen however they want. So they listen everywhere. Even though total audience numbers are up, time spent listening, and advertising revenue is down.

What Should Radio Do?

A brand is never about the product and always about the promise. Products are commodities and can be copied. Music is a commodity. Promises on the other hand are personal. So radio stations should start re-branding themselves by making a promise. But not promises like “The Most Music” and “Always 10 in a Row!”

Here’s where stations can learn from the businesses to whom they are trying to sell advertising. Local, small businesses know that you need to make a promise to differentiate the brand. For example, a truck accessory shop might promise excitement and a restaurant might promise romance.

Radio stations are missing a brand promise. What could they promise beyond the music they play? Where’s the station that promises to “help make parenting easier” or the station that stands for “God & Country”? How about a station that “helps people connect”?

Instead of trying to play more music with less talk, or use social media to connect with listeners, radio should spend more time exploring its values and discovering a mission. Why do you exist radio? To play music? I can get that on my iPod. Make me a promise, and then don’t be afraid to keep it. When you do, you’ll have a brand.

For more on branding, check out these articles:
Classic Spot: The Importance of Taglines in Branding
The Basics of Marketing: What is a Brand?
Growing In to Your Identity