If you want people to talk about you, make your message repeatable. That’s the meat of Bill Schley’s new book, The Micro-Script Rules: It’s not what people hear, it’s what they repeat. To earn word of mouth for your business, you have to first give people something to talk about, then give them the opportunity to talk. That opportunity is stifled if you don’t have a message easily repeated in a normal conversation. If you want to learn how to get your message right, I suggest you sink your marketing chops into The Micro-Script Rules. 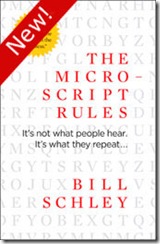 The Four Rules Of Word-of-Mouth Messaging

Our minds like simple messages; short concise rules-of-thumb that help us make snap judgments. To help you lay out your simple, repeatable marketing message, Schley lays out four big rules of creating your bite-size micro-script.

Rule #1: It’s What They Repeat

“They won’t say anything because you tell them to. They say it only if and because they want to say it, they like saying it, they gain from saying it. And for that, they have to understand it, believe it, like it, feel it’s valuable.”

Rule #2: Word of Mouth is the Master Medium

These are new days. We used to rely on the three big media for our messages: TV, radio, and print. But we got burned and after a while we learned that we can’t trust marketing messages. So we rely on our friends, family, and professional network for information we can trust. Word of mouth solves the trust problem, and in today’s connected world, word of mouth is everywhere. Schley says,

“Every Screen’s a Word-of-Mouth Machine.”

Micro-scripts are any set of words from one word, to a sentence or two that uses metaphors, descriptive imagery or just rhythmic words to verbalize an idea in a way that people like to say and to repeat to others. Schley calls it an “idea bite”

“It’s a bite that’s designed to be repeated because people like to say it., and because it makes an impression on others when they do.”

Your dominant selling idea is the ultimate value in what you’re offering. It’s the difference you’re trying to communicate. Don’t build your micro-script on a concept, boil it down to your single, best, differentiating attribute. Schley says that micro-scripts

“tell our brains how to get to the heart of the matter fast, and automatically take the best action.”

Putting Micro-Scripts on Your Menu

Micro-scripts are word-of-mouth utensils. They are simple, succinct idea bites of your dominant selling idea. By creating a say-able, repeatable 5-7 word script, you enable customers to become evangelists because you make it easy for them to carry your message, while at the same time elevating their own credibility and status. Your job is to create a micro-script that makes your dominant selling idea both repeatable and viral.

The current trend of blog-posts-in-a-book makes for a lot of short books without much meat. A lot of fluffy “what to do” trimmings without the main course of “how-to do” it. In The Micro-Script Rules, Bill Schley doesn’t just spout theory. He presents several templates for your micro-script, lays out an easy-to-follow process, and then gives plenty examples for you to plagiarize and synthesize. It’s the full meal deal. The Micro-Script Rules has lots of juicy, mouth-watering marketing meat, concisely plated in under 200 pages. Pull up a chair and dig in.